I always intended this blog to discuss all sorts of different subjects that are Based on Actual Math. Politics is the current big math problem, but I do have other interests, like Pac-12 football.

A few weeks ago I built a tool to simulate the rest of the Pac-12 season. The basic concept (Monte Carlo simulation) is the same as the election model. I simulate many many Pac-12 seasons then look at what happens most of the time, some of the time, or not at all. For example in 10,000 simulations today, Oregon won the Pac-12 North 6,474 times. Based on that I say Oregon has a 65% chance of winning the Pac-12 North.

What about the other teams? Who has the inside track to the Pac-12 title? Who will make a bowl game? Glad you asked.

Oregon has the inside track in the Pac-12 North. This is no surprise to anyone who's seen them play. Oregon State has also come on strong, they only had a 1% to win the Pac-12 3 weeks ago and look at them today! I'm sure my sister is thrilled.

Both Oregon and Oregon State have impressed, and according to some ad-hoc analysis I did today, their end-of-year Civil War game will decide the Pac-12 North Title a whopping 57% of time! Also Stanford something.

The south looks to be a two team race that now favors USC. The model didn't care much about USC's win over Colorado; it expected that, the big positive driver for USC was ASU's loss to Oregon. The upcoming game on Novembr 10th between USC and ASU will be big (the model currently gives a USC a 4.15 point edge and a 62% chance to win).

I've been running the model each week since September 22nd and keeping track of each team's relative chances to win the division. Notice how costly Arizona State's loss to Oregon this week was, and how Oregon State's chances have improved with each win. 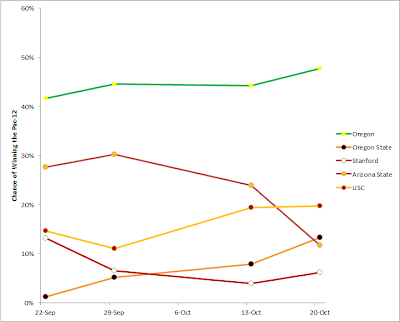 Read on for a more math.

Simulated Game Probabilities
I use each team's Sagarin Rating to calculate an implied point spread for each game remaining in the season. I then translate that point spread into a winning % based on historical data. I'll walk through the University of  Washington's schedule as an example: 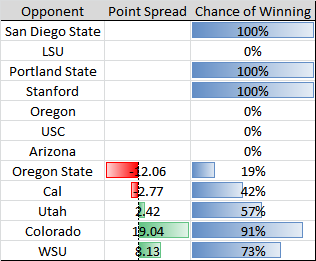 UW has already played 7 games and is 3-4 and this week they play Oregon State.

OSU's current Sagarin rating is 86.87 and Washington's is 72.34. Since the game is played in Seattle, I add the Sagarin home field advantage bonus of 2.47 to UW's rating, bringing them up to 74.81. UW is then projected to finish 12.06 points lower than the OSU (this is exactly how Sagarin ratings are intended to be used).

I use maximum likelihood estimation to fit ten years of historical data to a logistic curve that estimates win probability for any calculated point spread. That 12.06 point disadvantage for UW then translates into a 19% probability of winning. I do this math for each remaining Pac-12 game.


Note: In the simulation, if two teams are tied the winner is the team who won the head to head match-up, just like the real Pac-12. Three way ties are tougher to code. Based on the simulation I identified the three most likely 3-way ties and built adjudicative models for those scenarios, the rest are ignored. 4, 5, and 6 way ties are also ignored. All told a little less than 1% of scenarios are ignored.

Other Note: Dear wife I wrote this over the last few days, EOM6 wasn't a ruse so I could hole up in my office and blog today :-).
Posted by Patrick at 12:41 AM