First, we hit 3000 page views yesterday! Thanks for reading. Now to business - what might happen today? I have replaced my lean/likely/solid electoral map with the model's official prediction.

That most likely outcome the following map, where Obama wins every swing state, except North Carolina. This has been the 'most probable' Obama victory for some time. 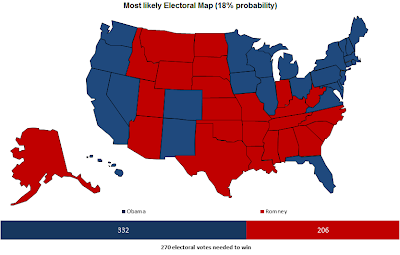 Next up: Romney's most likely winning map -where he wins OH, VA, FL, NH, CO, and NV. This map coming to fruition would indicate a serious systematic bias in the polling against Romney. It's interesting that this map is more likely than a map where Romney wins just OH, VA, FL, and one of the smaller states - I interpret this to mean if Romney wins it's because there's been a systematic polling bias. If that has has been happening it's likely been happening in many states, not just the key states.

Last, just for the sake of comparison - here's the final lean/likely/solid electoral map: