Washington being my place of residence, I've taken a particular interest in the local races and ballot measures. I have modeled the interesting WA races (and the Senate race), and have the following results to share:

Each entry contains the race in question, the options (candidates or yes/no) their relative chances of winning, and their projected final vote shares. 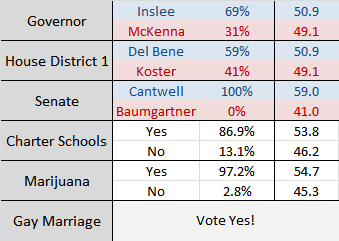 The races for governor and district 1 representative are too close to call. The governor's race has been the most extensively polled, and Inslee has shown a small but consistent advantage. Since August he has led in 13 of 15 polls, McKenna has led in one. I love this analogy from 538: Inslee is like a sports team that is ahead in the fourth quarter, he is the favorite to win but he's not a lock..

The goes for Susan Del Bene in the little-polled WA 1 race. Just two polls plus the Cook PVI for that district figure into the winning percentages and projected vote share.

Maria Cantwell will win reelection. Charter Schools and Marijuana will almost certainly pass. Gay Marriage is a strong favorite to pass as well, but it needs all the Yes votes it can get, and I don't want to jinx it.


The methodology I use here is very similar to the presidential model, there are three small changes.