More on Zone% and Batting Order: AL vs. NL

Today I read a blog entry on Fangraphs that discussed zone% (percent of pitches a batter sees which are in the strike zone) and how it relates to a player's position in the lineup. The purpose of the post to discuss the idea of protection (do hitters see more strikes when batting in front of good hitters), but I think the author found something else much more interesting.

Below are his core results, zone% by lineup position in the National League and American Leage 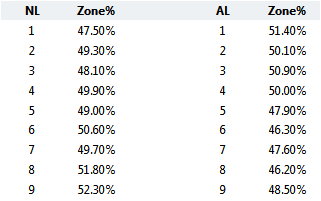 Here they are in graph form: 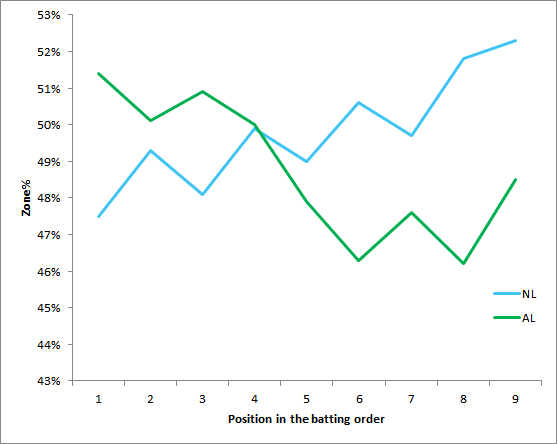 In the National League, the leadoff hitter sees the fewest strikes, the 9th hitter sees the most strikes, and there's a steady trend upward in between  This kind of makes sense to me since teams tend to (lol Mariners/Endy Chavez) put their best hitters early on the batting order.

In the American League (except for the 9th hitter) it's exactly the opposite!

Are there consistent differences in the lineups between the AL and NL? The answer appears to be no. Baseball reference has splits by lineup position readily available and I was able to calculate wOBA (wOBA is a comprehensive measure of a batter's value) by lineup position for 2012: 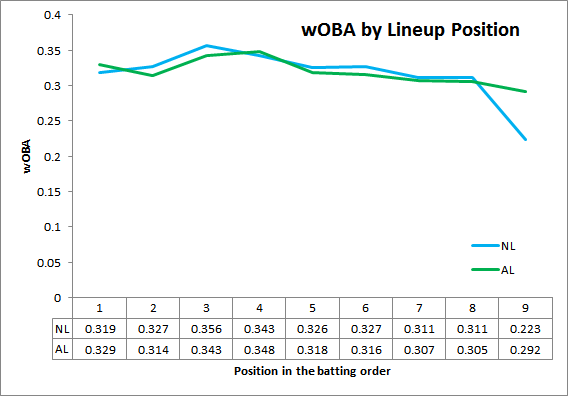 Almost identical. The 9th spot in the NL is, of course, pitchers. The graph looks the same using OPS or OBP.

It looks a little different if you use iso (iso is slugging percentage minus batting average, a measure of isolated power) 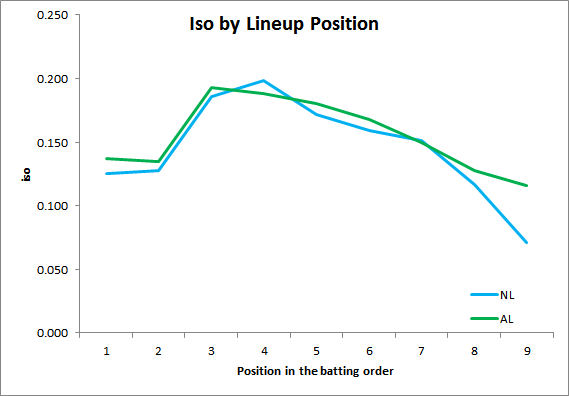 
Speaking of speed, there is one stat for which the curves diverge some, steal %. 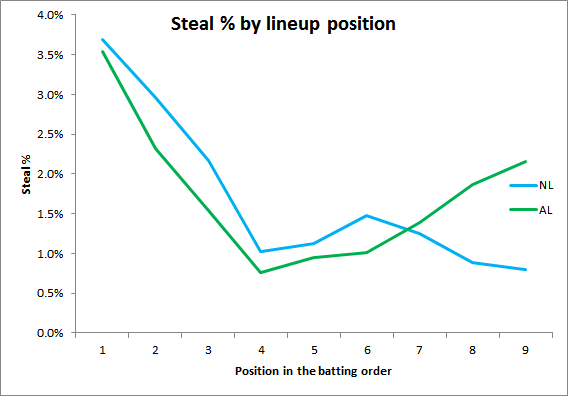 So it looks like the only real difference in lineups between AL and NL is pitchers batting 9th (and sucking). It's possible there is actually a difference that I've missed, but failing that I can think of 3 other options:

I started looking into number 2. I pulled in 2012 batting data (the fangraphs dashboard with pitch fx plate discipline data tacked on, min 300 PAs) for both AL and NL and looked for which metrics were well correlated with zone%1,2

The only place I see a consistent difference between the leagues is in speed. Fast NL guys still tend to get more strikes, but less so than fast AL guys.

I'm going stop now and think about what I've found so far. I'll dig further on another day.

1. There is lots of collinearity here (or there would be if these were all explanatory variables in a regression) so don't read high correlation with HR then also with iso as two separate pieces of information, as HRs go up iso goes up, so of course their correlations will be similar with everything. The purpose is to just get a picture of the kinds of players seeing more strikes in the AL and NL.

2. Note the use of playerid as a negative control, it should obviously be uncorrelated with zone%, so there is definitely some noise in the date. See here for definitions of all the terms in the table.