Which college football teams control their own playoff destiny?

I was wondering about this question, so I added an output to my last simulation that shows how likely each team is to make the CFP if they win each of their remaining games. So if Alabama wins out, how often do they make the playoff? (Spoiler alert: Bama controls their own destiny).

I did this calculation for each of the teams with even a sliver of a chance at the CFP remaining.

Tier 1: Controls their own destiny 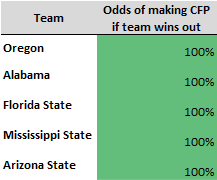 No surprises here. Mississippi State and Florida State are undefeated, and Oregon, Alabama and Arizona State would all be 1-loss Pac-12 or SEC champs if they won out. Of course, only 3 of these teams could actually do it (Bama/MissSt play on Saturday, UO/ASU will play if they win the rest of their regular season games). Which leads me to:

Tier 2: Almost controls their own destiny

TCU and Baylor each have one loss. If both TCU and Baylor win the rest of their games, the committee will probably need to choose between them. Both will have a quality loss and several quality wins, but TCU has been on a roll and they have the inside track being ranked #4 by the committee against Baylor's #7. The model reflects this, putting TCU in the slightly better position.

Nebraska surprised me. My impression of Nebraska isn't great, but all I remember is them almost losing to an FCS team. But should they win out, they'd be a 1-loss conference champ, with 3 decent wins to close out the season (@Wisconsin, Minnesota, Iowa) and a win over Ohio State in the Big 10 championship game. That's an impressive resume! I was surprised, but I think Nebraska would have a very strong CFP case.

I didn't know where to put Ohio State. They didn't belong in Tier 2, they don't belong with Ole Miss and Auburn, and god knows I'm not putting them in their own tier. One loss Ohio State has a decent CFP argument, but their B1G schedule was a little weaker and they lost to Virginia Tech.

Ole Miss and Auburn would have a shot if they won out, but they'd need help, first to get into the SEC title game and then to eek into the CFP as 2-loss SEC champs.

Each of these teams has an outside shot of making the CFP if they win out, but they need chaos across the FBS to get close.
Posted by Patrick at 9:25 PM