Are you ready for football?

I wrote a long post (with lots of pictures!) that gets into the single most powerful ideas behind my model, go check it out.

I'm continuing to experiment with new ways to analyze college football data, especially as it relates to the CFP. I have something new to try this week, and there's more on that below. First though, let's look at the graphic of dessssssssssssssstiny. I was curious which games had serious CFP implications, so I sat down to try and figure it out with math. It turned out that measuring "CFP Implications" was trickier than I expected. I started by adding the simulation output that finds, for each team, what their CFP odds would be if they won the game and what their CFP odds would be if they lost the game. For example: in the graphic below OU's CFP odds will be 33% on average if they beat Baylor this weekend, and 1% if they lose.

However, those statistics is not sufficient to measure CFP leverage. For example: Notre Dame is in a strong position to make the CFP. If they lose to Wake Forest this weekend that will change; their CFP odds will crash to near 0. So why isn't Wake Forest @ Notre Dame included in the list below of high leverage CFP games? Because there's almost no chance Wake beats Notre Dame; the game will be an uninteresting blowout. Were I to include only the "if they win" and "if they lose" numbers, I'd be stuck with games like Wake @ Notre Dame at the top of my list. I needed to do better.

I added a measure for how close the game is likely to be, and got the list below. I'm happy with that result for the time being. Especially since it pulled out OU @ Baylor. The final formula includes: CFP odds if they win, CFP odds if they lose, and likelihood of losing (closer games are better), and it gave us the following list of games. 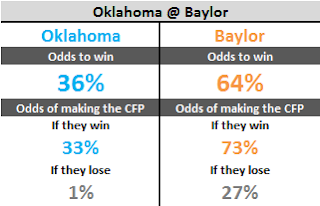 Duh. I could have picked this game as the top CFP game without any math at all. Oklahoma and Baylor both have a good shot to make the CFP, the loser will see their CFP odds plummet, and the game is expected to be close. Alabama looked like the best team in the country last week, they stopped the Leonard Fournette freight train in its tracks. No rest for weary though, as they head to Mississippi State, and they'd better be up for it, because a single loss could doom them. 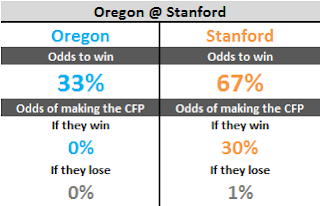 For years this has been the flagship game in the Pac-12, and it is again this year. In past years Stanford has spoiled the season for Oregon several times; I'm sure Oregon is looking to return the favor and knock Stanford out of the CFP. 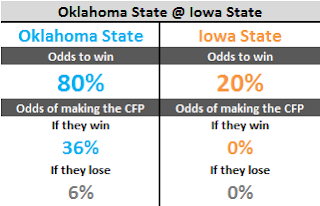 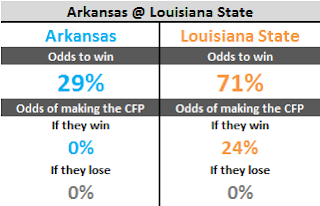 LSU had a rough week last week, but they're still in the hunt. They only have one loss and could sneak back into the SEC championship conversation with an Alabama loss. But this should be a good game, the hogs are always tough.