Every day for the last week (or more) I feel like I could have written the same post about Trump's staggeringly bad poll numbers, and today is no exception. He got yet another broadside of terrible polls:


After adding these polls to the model, Trump's probability of winning the presidency is down to 11%. He's more likely to lose Kansas than win Virginia. That makes me feel hopeful.

There are many many takes available to read on the subject of why Trump is dangerous, foolish, lazy, and bigoted. He's shown himself to be unfit for the presidency time and again, when he shows contempt for the Constitution, when he calls people names, when he demonstrates his total lack of will power, when he foments violence, and when he gives voice to nutty conspiracy theories.

Driving into work today though, I thought of something else: the way he's handled the adversity of these last two weeks.

Two weeks ago, Trump's chance to win was near its peak, at around 26-27%. Then this happened: 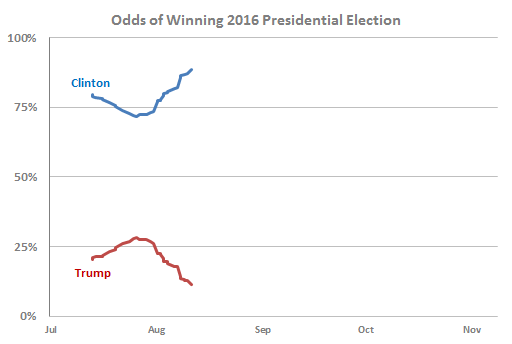 It's been quite the downward spiral, starting with the DNC and Trump's spineless attacks on a Gold Star family, and ending... who knows when.

But that's OK! When the going gets tough, the tough Trump and his delegates...
and of course...
It's hard to overstate how bad the last two weeks has been for Trump's campaign. The way he and his delegates have responded to that adversity, with denial, delusion, and finger-pointing, is just one more item on a long list of reasons he can never be president.