It's been a surreal couple of weeks. Even my model's movement, though much smaller than others, was making me sweat. On 9/25 Trump reached an all-time high of 16% chance to win in my model. But then that glorious debate happened, and the trend started going back in my preferred direction. America's preferred direction, really. 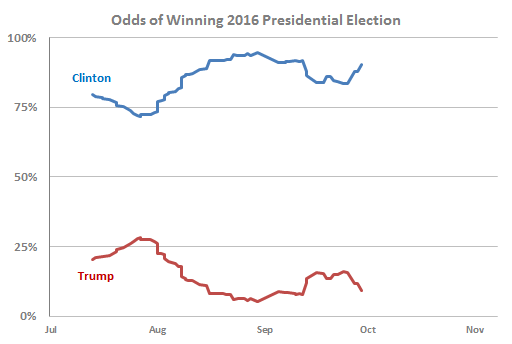 A couple of thoughts on the debate, related to two of my favorite things: actuarial exams and poker

Once you get in a rhythm of taking actuarial exams, and you understand what they are, there's no excuse for not being prepared to take one. You know what material is going to be covered, you know when the exam is, and being prepared is just a matter of discipline and motivation. What's more, if you are unprepared, no amount of flash, razzle dazzle, or bullshit is going to save you. If you are unprepared, you'll be exposed and fail, unless you get very, very, very lucky.

That is, of course, exactly what happened to Trump on Monday night. He had prepared a couple of responses (trade, his ridiculous birther defense) but he was otherwise left floundering, frustrated, exposed. His lack of prep should have surprised no one, but it really was a stunning demonstration of why he can never be president. Here's your chance to make your case to 80+ million people, all at once, and you can't be bothered to do your homework? Amateur hour.

I think Trump's chance to win the presidency might be even less than my model is estimating, and poker is the reason why. When I was playing poker and I would spot a specific, consistent flaw in my opponent's strategy, I would make full use of that flaw as often and as frequently as possible. As a consequence, I would end up winning even more money than the skill difference between me and my opponent might predict.

Trump has a flaw, and Clinton has noticed. When you attack him, he attacks back tenfold. He can't help himself, it's incredibly predictable. It's actually kind of ironic; Trump often talks about not taking things off the table or not revealing your strategy to the enemy, and yet his own behavior is incredibly predictable. He lashes out at anyone who attacks him, indiscriminately. It doesn't matter if his attacker is incredibly sympathetic (the Khan family) or a member of a demographic group(s) he's really struggling with (Alicia Machado), and it makes him look like the angry impulsive buffoon he is. The Clinton campaign has noticed, and I expect them to keep using that flaw to their full advantage.