Remember 3 days ago when I wrote that Clinton had quite a good week and was now an overwhelming favorite? That was roughly 18 hours before the now infamous Trump tapes were released, where Trump brags about committing sexual assault, so I imagine he may look back on the days when he was just calling Alicia Machado fat as the good old days.

The Vox string I linked to above contains many insightful takes. The two that most resonated with me were:


But my own take is for those saying: "Why didn't you abandon Trump before? Why was this the last straw after he did 55 other putrid things?"

I agree with you, and there should be a reckoning for politicians who are jumping ship now, probably because it's politically convenient. They gave us Trump and, I hope, there will be consequences for that. But this news is very bad for Trump. It makes him even less likely to become president, and that is very good. So instead of lecturing people on their hypocrisy, let's stop and ask what it is we're trying to achieve, then take actions consistent with that. 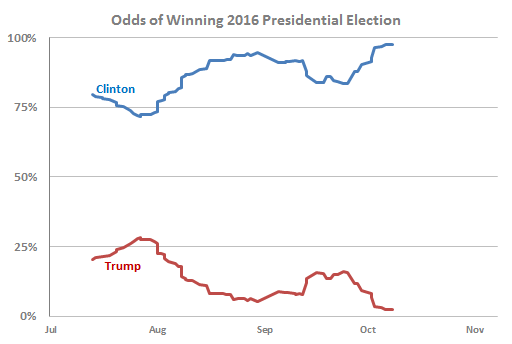