Last Thursday I published a prediction model for the MLS final which identified LA 2, Houston 1 as the most probable outcome.

It came so close! The game was 2-1 until the 4th minute of stoppage time when LA were awarded a penalty kick. They converted and the final score, 3-1, was the sixth most likely model outcome. It occurred in 6.8% of simulations. 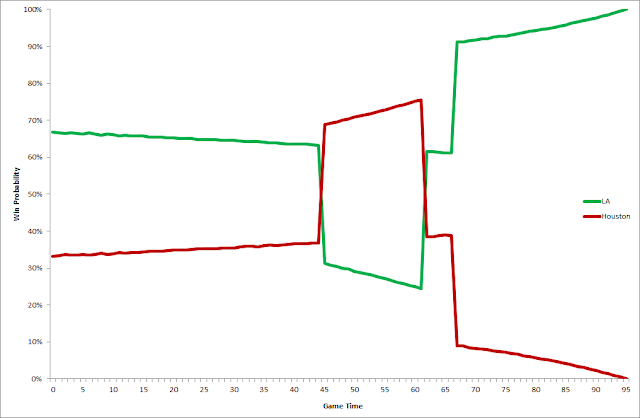 The graph speaks for itself. Win probability is calculated using goals, red cards, and game time. There were no red cards in this game so the 3 key goals speak for themselves.


With the score 2-1 in the 93rd minute I was excited. I know that having the outcome match what happened to be the most likely model outcome isn't much better validation of the model than any other reasonable outcome, but it's still justfun to root for getting things exactly "right."

I created a graph of the top 6 predicted outcomes and how the probability of each changed as the game wore on:

The small version is quite data dense. I recommend you open a the full size image.

At the start of the game the probability of each outcomes matches the forecast, and as the game wears on with no goals, the low scoring outcomes become more likely. Then in the 44th minute Houston scores and their zero-goal scenarios drop off. In the 66th minute the same things happens with LA.

I'm working on a Win Probability tool for the next MLS Season (or other leagues? It's hard enough rousing people's interest in MLS though). It's cool, you enter the teams, goals scored and red cards and the tool outputs the win probability graph. It's also got the capability to do midgame probailities (i.e. you enter a game time of 45 minutes and the graph lines only go across halfway and gives the current probability of each team winning. i.e. "my team is up at halftime what are their chances of win/lose/draw?").
Posted by Patrick at 11:56 PM