Week 4
Last week there were more differences between the model's predictions and Vegas lines than I could remember. I happened to be going to Vegas, so I had plenty of options for games to bet, and bet I did. There is more detail below for interested parties, but spoiler alert: the results were disappointing. It could be game level variance, it could be that the model is missing key info on some of the teams I bet, it could be karma (remember my warnings about Vegas overconfidence!). Whatever it was, I had a looooong day on Saturday.

This week though, the model is in lockstep with Vegas. The model's correlation with Vegas lines this week is 0.985. It was 0.961 last week (week 3). Those two numbers may seem close but look at how far each is from 1 (perfect correlation). Week 3 is over twice as far away. Suffice it to say my model and Vegas disagree on very few games this week (UW vs. Cal being one of them; go dawgs!).

On one hand that makes me feel good. Vegas lines, especially those with a lot of action on them, are well-calibrated, and aligning closely with them is good. On the other hand, lines shouldn't be taken as canon and one clear goal in building a college football model is to beat or competes with, not match, professional odds-makers.

Week 4 looks like a standard awesome college football week, propped mostly by the Pacific 12 Conference which figures to just deliver. USC/ASU, UCLA/UA, Utah/UO and Cal/UW? How can you go wrong? 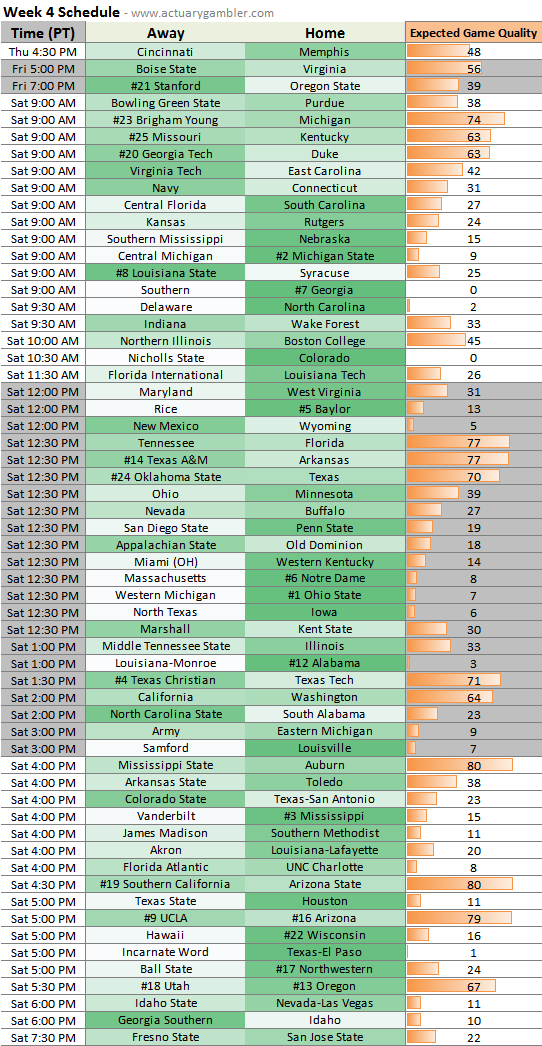 Vegas
On one hand, I was down betting college football. On the other hand I more than made up for it with poker, so that's something. College football results were disappointing though. If I had my druthers I would have crushed college football and lost at poker, I know I'm a winning poker player; the jury is still out on my model's predictive value compared to Vegas lines.

I bet 9 games, and won 3 of them, losing roughly 1/3 of the money I bet. I would categorize my results into the following categories:

Notes on the data presentation
Posted by Patrick at 8:55 AM