As we head into another glorious weekend of college football, I'd like to share a Week 3 Viewing Guide I've been working on. The guide includes a new metric I've been working on called Watchability. My purpose in inventing Watchability is to help people identify close, well-contested games they might not have otherwise thought to watch. Going forward I plan on posting one each week on Thursday mornings. I tried to include as much information as I could without being overwhelming. For each game I'm showing: 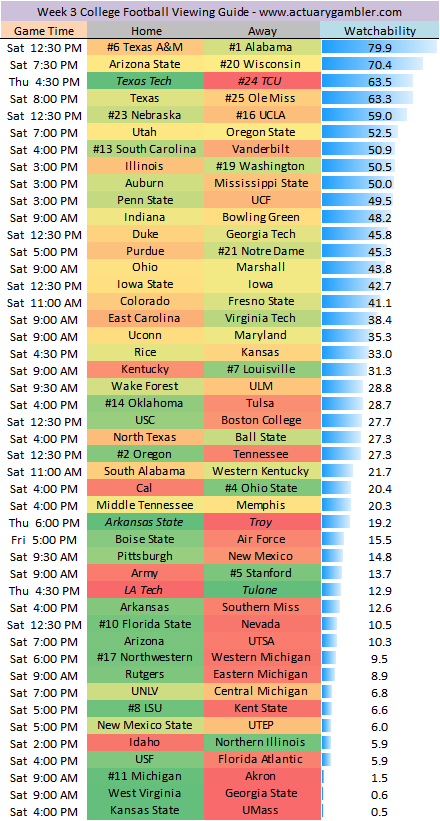 I calculate Watchability as follows:

I then translate Power Rating into Watchability by calculating on how far each team's chance to win the game deviates from 50% and reducing Power Rating accordingly. The reduction is based on the square root of the deviation, so 60/40 games are only slightly penalized relative to 50/50 games, but 90/10 games are penalized heavily because blowouts are so boring. Take the two example games: Oregon is a 90% favorite so that game's Watchability is 27.2 (reduced significantly from its power rating of 72.7). On the other hand, ASU and Wisconsin are nearly 50/50, so that game's Watchability is 70.43 (nearly identical to its Power Rating of 70.45).