Bowl season starts tomorrow. 76 teams and 39 games and Christmas and the inaugural College Football Playoff! Can you stand it???


But before we get to the bowl games, a quick note. This is likely my last big post on College Football for the year, and I want to get a little sappy. I feel lucky to be able to write this blog and do math on College Football and other things; it's such a rewarding hobby. Thanks to my beautiful wife who has little interest in football math for proof-reading each post, often while she was falling over with sleepiness. What a great wife she is! Thanks to everyone for reading all season. I hope it was as fun and interesting for you as it was for me. Stay tuned for the next big topic!

Now back to business.

Who's going to win?

America already won. Having 4 teams in an inaugural playoff adds so much fun to the college football regular season. So many teams were in contention late, so many regular season had CFP implications, I loved it! Hope you did too.

OK, which team is most likely to win the CFP?

Oregon and Alabama are nearly equally likely to win their semifinals, but the model rates Oregon slightly higher than Bama so Oregon is the model favorite to win the CFP.

OK, what CFP final matchups are we likely to see?

With both teams being 9-10 points favorites, Oregon vs. Bama is the most likely finals match-up. But there's a 50/50 chance we get something else!

What's the actual most likely outcome of this whole shebang?


Oregon beating Alabama by 3 is the single most likely outcome for the college football playoff. 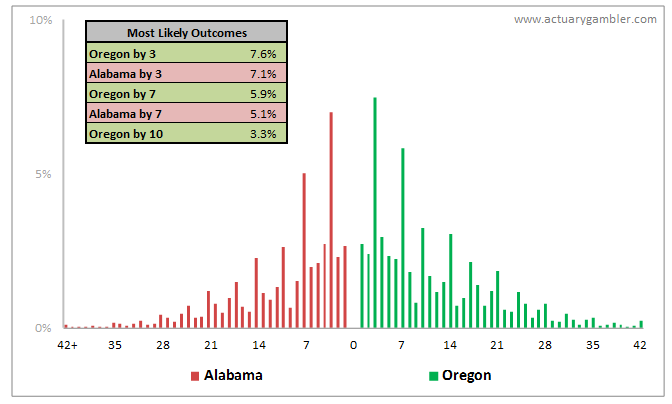 You know there are other bowls right? Not just the CFP?

Well, these are the most watchable games of the bowl season. Notice that the CFP semifinals aren't the top two. Remember, Watchability is a context neutral statistic that doesn't know about bowl games or CFPs or ducks. Also, the team in darker green is the modeled favorite. 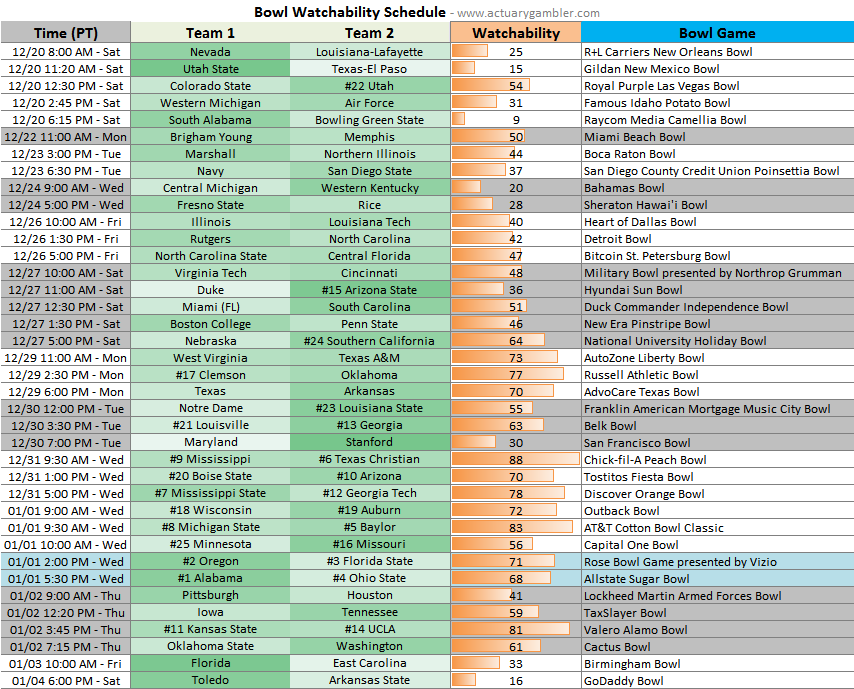 In terms of bowl representation, SEC forever.
Next comes the ACC with 79% (11/14) of its teams in bowls, then Independents, then Big Ten (what? Big Ten??? It surprised me too, but wait for it, the Big Ten's reputation will be redeemed). 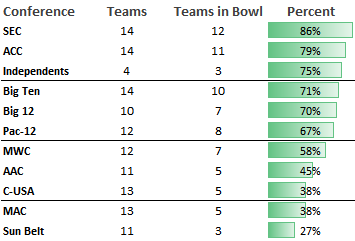 Going to a bowl is great, but winning a bowl is what you want to do!

Here's where the Big 10 resumes its familiar spot. 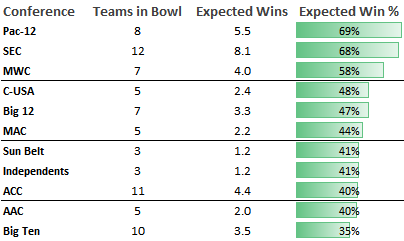 A last bit of bowl game math: here's a chart showing how likely each number of wins is for each conference. For example, the SEC has a 6% chance of winning 11 of its bowl games, and a 1% chance of going 12/12

That's a wrap on the major college football math. Thanks again for reading and go Huskies!
Posted by Patrick at 11:40 PM