The CFP  rankings have been released, we've already had some MACtion, let's do some math.

Oh man. It begins and ends with Baylor/OK, doesn't it. Each team controls its destiny in the Big-12, and very likely in the whole CFP, and this is Baylor's first real game of 2015. In other spots we see both UW and WSU football games on the Top Ten list; it feels good. 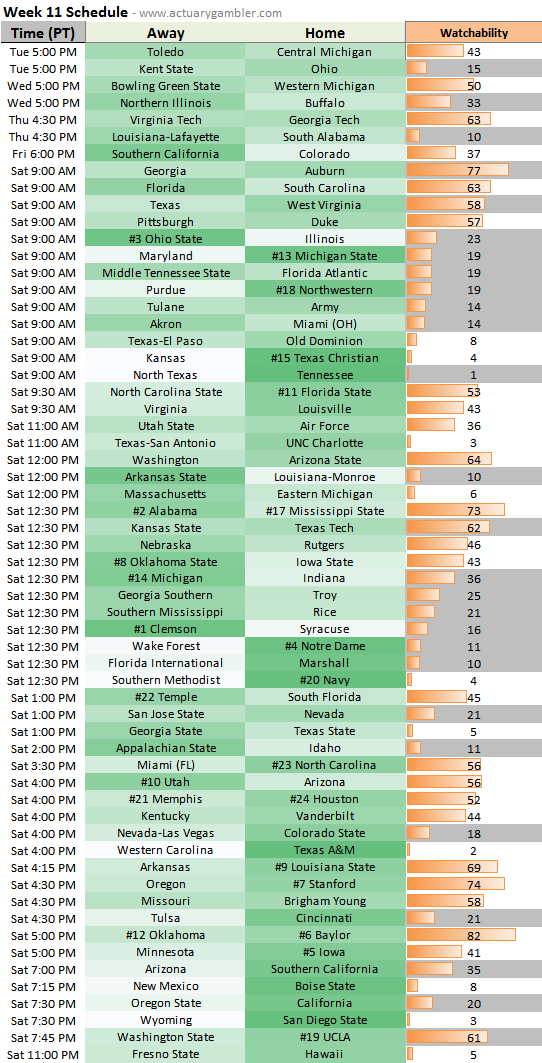 I added two columns to this week's outcome chart. Their focus is the new published about idea: Posterior Win Probability

The first column shows how that game's outcome translated into PWP. For example, Louisiana Tech rolled over North Texas. Their 56-13 margin of victory translated to a 99% PWP. Since Louisiana Tech's prior win probability (aka model confidence) was just 97%, we say the model was wrong by 2%.

The model was much, much more wrong on New Mexico State @ Texas State. Texas State was supposed to crush NM State, but instead they went down 31-21, a 10-point loss that translates to a PWP of 23%. It's fun to see when the model is super wrong, but there's another reason I like the PWP addition here.

In past weeks, we've looked at whether the model called the right winner. But predictions that accurately get the winner aren't all equal. You can be right, barely right, or even really right. For example, the model correctly picked both Florida and Temple, but while the Temple prediction was awesome, the Florida game turned out much closer than the model expected.

So not only can we now see right pick vs. wrong pick, we can see how right and how wrong.