Election Eve Update 1: Where I've been & Fixing a Bug

The new baby I mentioned in my previous post was born with some health issues and has needed a lot more of my time and mental energy than I could have possibly predicted. I have been updating election data on the left hand side of the page, but I haven't had the energy to do much else, including catch the bug I'm about to discuss.

At some point in the last few weeks, a bug was introduced into the model that essentially made state outcomes independent. This isn't how the model was designed and is incorrect (state outcomes are dependent - if Clinton is doing well in one state, it's likely she's doing well in another). I've rectified that, and now the published output shows the true output of the model, rather than the result of the bug.

I've also reconstructed what the model's true output would have been during those two weeks, and put the results on the graph below. Clinton's odds to win peak around 99% before dropping to their current levels. 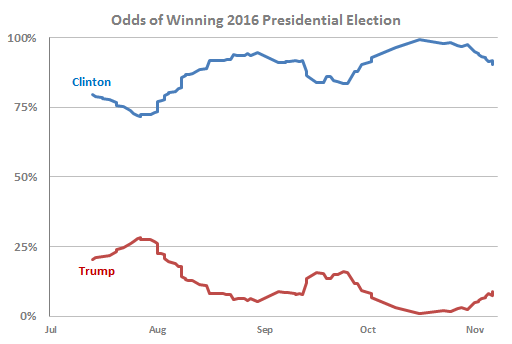