Actuarially, Romney is 75% more likely to die in office

Having taken (and passed) the actuarial exam on life contingencies a mere 18 months ago, I started wonder: which of these guys, if elected president, is more likely to die in the next 4 years?

My final best estimate answers are Barack Obama has a 5.6% chance of dying, and Mitt Romney has a 9.7% chance, roughly 75% higher.

Read on for more details.

Actuarial standard of practice (ASOP) 23 is about data quality. It has been one of the subjects of my recent course work. One of the key principles, regarding missing data, I would distill to the following sentence: When you don't have all the data you need, fill in the blanks with your best honest estimates, then be realistic and transparent about their limitations.

This exercise is a good real-life application of that principle. I will piece together data from various sources to:
1) Calculate the odds of males the same age as Obama and Romney living the next 4 years
2) Make adjustments based on this specific situation


Life Tables
Social Security life tables work the following way: imagine a population of 100,000 live births, then ask how many of that 100,000 are, on average, alive after each year? The following numbers started at 100,000 (back at age zero) and have fallen off each year:

Mitt Romney is currently 65. To calculate how likely someone in this population is to live from age 65 to age 69 you subtract the number still alive at 69 from those who were alive at 65 to find the number who died in the interim. Then divide the number of deaths by the population alive at 65. I'll restate the same process in the form of these two equations:

The next step is to make adjustments based on this specific situation. I explore the need for an adjustment based on the following:

1) Barack Obama used to smoke
According to this article the president quit smoking recently. He was a smoker for 30 years, but had smoked infrequently since his first presidential run in 2007 (a few cigarettes a day). According to this article the average smoking adult smokes 5,772 cigarettes per year (holy! that's 15/day), and each one takes, on average 11 minutes off his or her life.

Based on this, in doing the life table work I treat President Obama as 3 years older than he actually is.

Using historic probabilities, I would need to add 9.1% to the mortality probability for each candidate to account for assassinations. However, secret service procedures have improved significantly since the late 19th century. I don't think asking the secret service how much would get me anywhere, so I'll estimate.

Even since the 1960s protection procedures have improved (i.e. the president no longer rides around in a convertible). Since the late 1800s they have improved dramatically. I've settled on an estimate of 75% improvement, that is - President Romney/Obama is 1/4 as likely to be assassinated as the historic rate of 9.1% would imply.

There's not been a good study conducted on the combined effects of presidential aging and improved healthcare that I'm aware of. The sample size is just prohibitively small. Instead I take a high-level approach. All presidents lived to at least 40, so I researched what were expected lifespans at age 40 throughout history, and compared each president's outcome to his time-period. 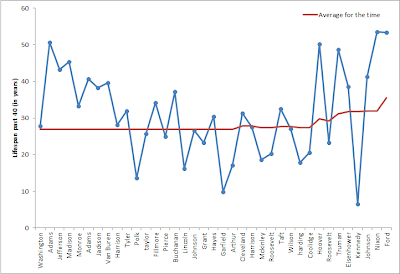 The data are noisy, but presidential lifespans don't appear markedly different from the average lifespans for the time. I'm comfortable calling 3 and 4 a wash.

Putting it all together, age, smoking, presidential danger I get the following: