I've updated the model, but it's to be taken with a grain of salt until we get some post-debate polling in the next few days. Once that happens, everyone will know what kind of bounce this debate win has given Mitt Romney, but there's no reason to wait when you have math.

I begin with some excellent research done by Nate Silver. He examines how effective previous presidential debate winners were at transforming those wins into gains in the polls, and makes a prediction for what Mitt Romney's polling gain might be. I expand on his work by adding a confidence interval to that prediction, and projecting Romney's average polling gain into an average national outcome: 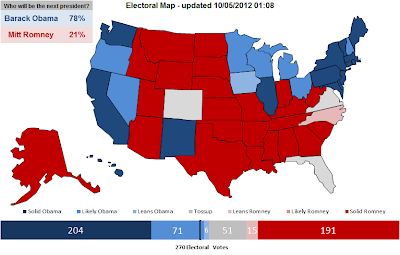 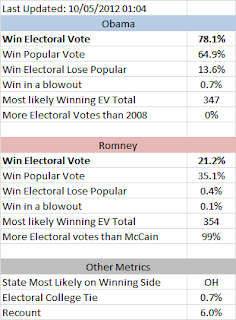 There is a lot of uncertainty here. The debates could have helped Mitt Romney more than I'm showing, or less. I'm just displaying the average.

What that average outcome shows, though, is an improved position for Mitt Romney. He may have put FL, VA, and CO back in play, and IA within reach. If he can realize this debate win into polling he'll have improved his odds to win from 5% to 20%, essentially overnight.

A silver lining for the president is that his electoral college advantage persists. Even if Romney does win FL, VA, CO, and IA he'll still by shy of 270 electoral votes. To get there he would need to flip OH, OR, MN, WI, MI or another likely Obama state.


Read on if you want more math.


Nate Silver examined  the predictive power of instant reaction polls. He found a very slight relationship. The trend line on his graph represents a change in polling by size of debate win. Using the trend line equation Nate calculates a 2.1 polling gain for Mitt Romney.

I expand on his work and calculate a confidence interval around that prediction. 90% of the time Mitt Romney's gain in the polls will be between 6 points and -1.2 points, There is a chance Romney loses ground, but he has a 73% chance of making some kind of gain in the polls. This graph is based on the same data, with the same trend line as Nate's graph. I've added the confidence interval. 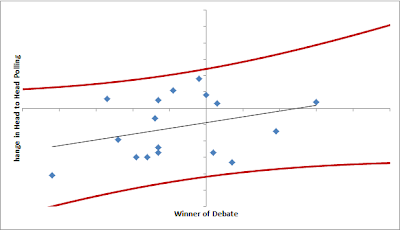 The model works by simulating elections over and over. For the current post, I add one more piece to the simulation: a value for how big Romney's debate bump was. The value is based on the point prediction and confidence interval associated with Romney's 42 point win (I use a normal distribution with mean equal to the point prediction for a 42 point debate-poll win (+2.36) and standard deviation equal to the std. error of prediction at that point (2.073).

Whatever value the model simulates was Mitt Romney's debate win it adds to all his polls. It then estimates his chances to win based on those new "polls". The model does not treat every state equally, states with more undecided voters are influenced more by the debate outcome, states with fewer undecided voters are influenced less. All the state outcomes are given below: