Alright alright ALRIGHT! That was a fun day off (and boy did I need it). It was an amazing group stage, it's been an amazing world cup so far, and now it's time to focus on the knockout stage.

The win probability graph looks a little different now that ties are no longer a possibility. The team's win probabilities should now always add up to 1. We're also showing the likelihood that the game ends in each of Regular Time (90 minutes), Extra time (120 minutes) and on Penalty kicks. Hope everything works as I'm expecting! 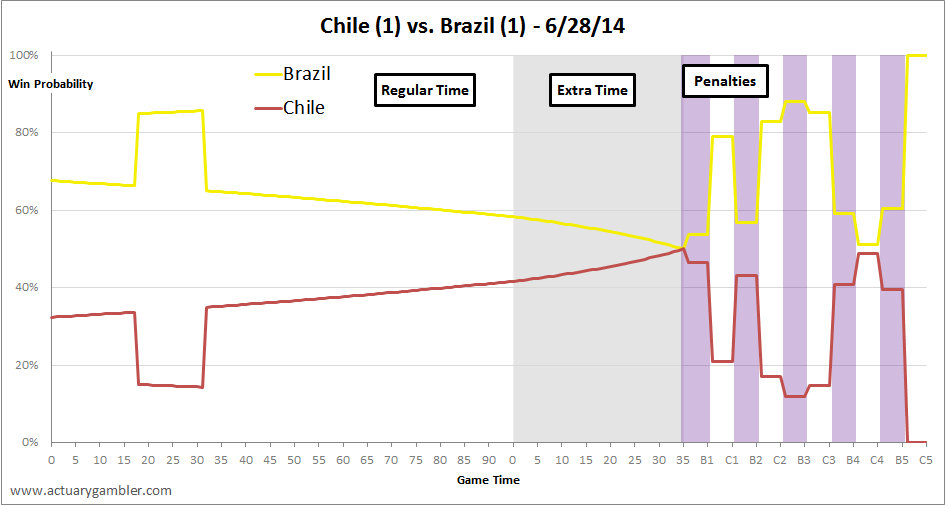 I've made the traditional goals scored heat map - it's showing the result after 120 minutes. Note that ties are way less likely. 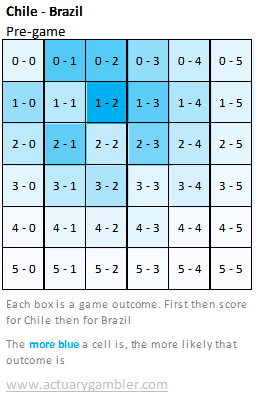 For those who've been living under a rock the knockout stage is different in that there are no ties. The game can end in one of the following 3 ways:


I've adjusted the model to account for all 3 scenarios.

A team's win probability works the same way in extra time (chance of winning in extra time + 50/50 for the times the match goes to a shootout).

A team's win probaiblity in a shootout will depend on the specific goals made/missed situation. For example when the first team makes it's penalty its win probability rises, if the second team also makes its first penalty the odds return to 50/50.

The higher rated team retains an advantage in extra time, once the game goes to a penalty shootout it begins as 50/50. Note that this is how the model has always worked for simulating the world cup winners, this just marks the first time I've needed to model in-game probabilities for extra time and penalty shootout scenarios.