Call it. I'm out. Thanks for following along.

Looks like as Marco is talking he's also locking in 2nd.

Looks all settled except Rubio and Cruz

2nd turning into a dogfight

2nd is gonna be a sweat. As a side note man the predictit markets are fast.

Interesting to see model less confident than the networks, who have already called it for TRUMP.

Nevada
Gymnastics Saturday with the kids takes priority over election math, so apologies we didn't have updated results in NV, which now looks like Clinton has on lockdown. The only thing left to sweat is Hillary Clinton's margin of victory. Based on expectations going in a small victory (0-5%) would have likely been a disappointment for Clinton, while a big victory (10%+) would be exceeding expectations.

As of right now she looks to be headed to a "meets expectations" kind of day. 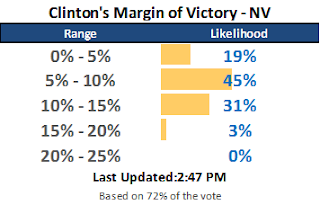 South Carolina
Just as soon as the votes start coming in, I'll be posting each candidate's live odds of winning. I'll be using the same model I used to extrapolate NH primary results It's a Bayesian model that starts with each candidate's projected vote totals* and applies them to each county.

Here's where we stand now:

Just like New Hampshire, once votes start coming in the model will learns how the county is actually voting and update accordingly, balancing its prior expectation with that new information**.