Hawaii
Caveat 1: Hawaii is tricky because we had zero idea going in.
Caveat 2: Most of hawaii is in Honolulu county and only 9% of the vote is in there.

That said, TRUMP is winning every island.

Call it in Idaho.

Looks like we're about ready to move on to hawaii. Idaho winding down. Networks called it already, but I'll go out on a limb and say that's premature ;).

Update - some more Ada county (Boise) came in and its great for Cruz. That's really good news for him, running now.

Idaho: He's behind but early on it looks suprising for TRUMP based on Boise. Only 3% of the vote in, so some skepticism in order but it's heavy TRUMP, so he looks poised to sneak back in it.

First Idaho update, still 40% of the counties have no votes reporting, so we're a ways away.

There is almost no polling in Idaho, I constructed some prior assumptions based on the polling there is and national polls, but they should be taken with a grain of salt. The model will move quickly once results come in, but I just wanted everyone to know where we started.

Does bernie win by more or less than 30k votes? 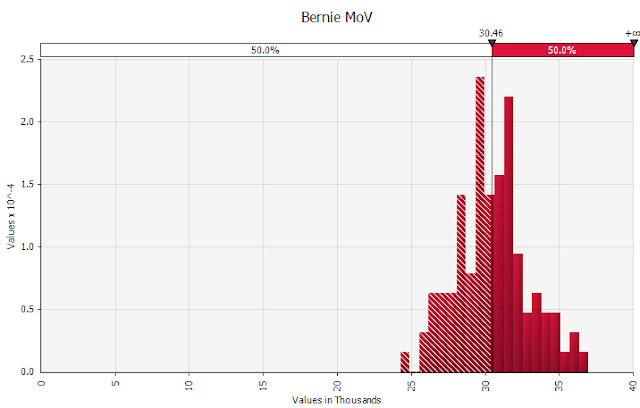 Wondered if I might have back off my Michigan call for Sanders, but I don't.

My Michigan call for Kasich on second on the other hand. Remember that we're working with 100 sims so 100% means >99.5%. When I'm about to make a call for 1st I jackit up to 1000 sims, not so when simulating second. Sorry about that.

Call 1/2 in Mississippi. How is Kasich beating Rubio?

How bout that Michigan

MI locked in for the republicans, getting more interesting for the democrats.

I said I'd model the Dem race in Michigan if it got interesting. Here we go.

This is resolving rather quickly

Not Mississippi. The networks might be making a call based on like 1k votes but I'm not there yet. I mean, I get that it's good so far for TRUMP but remember louisiana.

What are we calling today's voting? If nothing else has been chosen I nominate Super Tuesday Aftershock. Not nearly the same scale as Super Tuesday, but a similar idea.

I've built models based on principles similar to my prior primary models (county level Bayesian extrapolation) for the Michigan and Mississippi primaries (Republican models only, I expect the Democratic contests will be boring, but if that changes I'll model those), and as I have time during the night I'll build them for the Idaho Primaries and Hawaii caucuses as well - only republicans are voting in these states today.

I'll use the same updating style as previously: when new data is available I'll add it to the top of this post.

Michigan
This has been polled well and TRUMP appears to have a significant advantage. While the contest for first place could be over quickly, there are a couple of secondary sweats. First, do all the candidates (Rubio in particular) cross the 15% threshold required to recieve any delegates at all. Second, who gets second place. If it's Cruz that furthers his argument he can be the anti-TRUMP, but if it's Kasich it hurts Cruz argument and sets up Kasich with some momentum heading into Ohio next Tuesday.

I'm trying out a new (clean and simple) table design with an eye to reducing clutter and focusing on the key numbers.

Just like Michigan, TRUMP comes in as the favorite. TRUMP has had a big edge in the polling done in Mississippi, but there hasn't been that much polling done. Additionally, Cruz over-performed significantly in Louisiana at the expense of TRUMP. So TRUMP is the favorite, but Cruz has a shot.